Posted at 10:11h in Latest News by Georgia Hudson

A 12-person crew from Geotek Coring participated in a short expedition to test the PCTB pressure coring tool in natural hydrate-bearing formations in Green Canyon, Gulf of Mexico.  The expedition took place in May 2017 on Helix’s Q4000 semisubmersible drilling platform, under the auspices of the University of Texas at Austin in partnership with the US Department of Energy’s National Energy Technology Laboratory (NETL).  The main goal of the expedition was to test and compare the core recovery of two different bit configurations of the PCTB corer by drilling one hole with each variant, continuously coring through the main hydrate-bearing interval.   While the first hole proved challenging for both pressure coring operations and recovery, the second hole was extremely successful and demonstrated that this coring tool can collect complete sections of hydrate-cemented silts and sands under pressure with nearly 100% recovery. 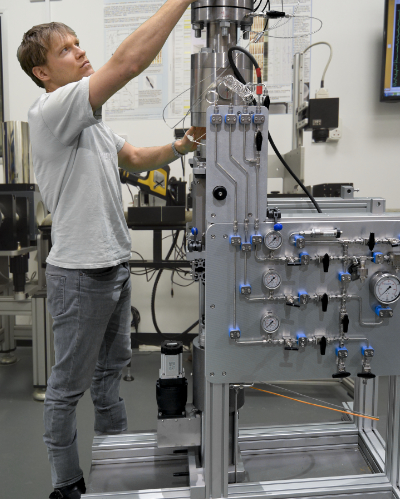 The recovered pressure cores were processed in PCATS (the Pressure Core Analysis and Transfer System), which provided foundation data sets taken under pressure consisting of gamma density scans and P-wave velocity profiles, along with full X-ray CT.  The cores were cut under pressure and approximately 20 meters of core were transferred to long-term pressurized storage chambers.  These pressurized chambers were transported cold  in a US Department of Transportation-approved overpack transportation system to the University of Texas at Austin’s  ’Pressure Core Center’ where they will be further subsectioned under pressure using “mini-PCATS” and samples will be distributed throughout the scientific community.   A critical set of measurements will be the permeability of these never-depressurized hydrate-bearing sediments, which will be measured using the K-nought permeameter, an apparatus designed and built by Geotek that will reapply effective stress to a sample cut and transferred from Mini PCATS and allow direct-flow measurements of permeability.